What happens when an ICF wall is exposed to Freezing Temperatures? (The Thermal Mass Effect) 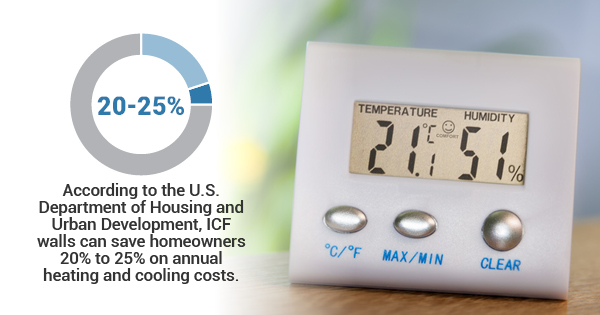 HOW LONG IT WOULD TAKE FOR THE HEAT TO TURN ON WHEN AN ICF WALL IS EXPOSED TO A FRIGID -31°F?

We placed an ICF wall* in the middle of a test chamber. The temperature on one side of the chamber was reduced to -31°F, while the temperature on the other side was maintained at 70°F by a heat source.

View/download this Thermal Test infographic to see the thermal performance boost created by the ‘Thermal Mass Effect’ of a Nexcem ICF wall!

WHY DO YOU NEED THERMAL MASS IN YOUR NEW HOME?

Put simply; thermal mass is the ability of a material to absorb, store and re-release heat energy back into your living space when it is required. Different materials have different capacities for storing heat energy. Wood has more thermal mass than glass, Concrete or stone has more thermal mass than wood. That is how and why the rocks around a camp fire stay hot long after the fire is extinguished. Harnessing this material property is an ancient building concept that has returned in the construction of new homes. It can enhance our living spaces, reduce our negative impact on the environment and save money.

WHY IS THERMAL MASS SIGNIFICANT?

Consequently, we’re fighting a constant and often expensive battle to maintain a comfortable temperature within our homes.

Modern buildings are massively insulated and sealed to reduce this natural transfer of heat. But this is just separating the outside world from the internal environment we create. Exploiting thermal mass enables us to harness nature to regulate the temperature of our homes.

HOW DO YOU HARNESS THERMAL MASS?

To harness this phenomenon requires a high mass structure, such as an insulated concrete form wall assembly. The concrete absorbs and stores the heat during the daytime and gradually releases it when the outside temperature falls at night time.

In summer, the thermal mass effect keeps internal temperatures cooler for longer. In winter, it helps maintain a stable temperature inside by absorbing solar gains through south-facing windows and releasing the heat back at night, thereby reducing heating costs.

Thermal mass is not a substitute for insulation, but when used together can create the best thermal outcomes. Thermal mass is also not a given with concrete structures and depends on building orientation, percentage of south facing window areas and local temperature swings.

For maximum effect, the thermal mass should ideally be inside the insulation of the building envelope. In this way, a well-insulated building with a high volume of available thermal mass can maintain a very stable internal temperature year-round with minimal heating and natural ventilation.

Nexcem  ICF creates a high thermal mass concrete frame structure. The insulation is predominantly on the outside of the unit with the concrete on the inside, creating a monolithic concrete frame. Nexcem, with its few component parts, also has fantastic thermal transmittance performance at the junction details (doors, windows, walls, floors, etc.) where heat loss can be problematic in traditional structures.

To find out more about using Nexcem to achieve thermal mass in your build project, please get in touch.